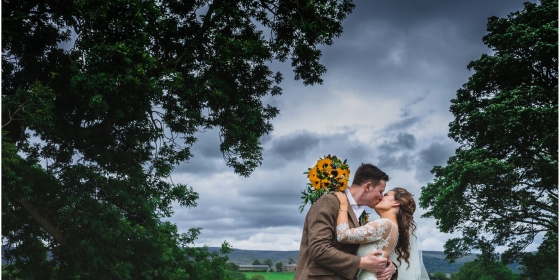 Ellie & Adam’s wedding was one, where I’d been invited along to second shoot, this time for Vivienne Edge Photography.

I nipped in to see the girls, first thing, but as Viv was more than capable, I was asked to go & see Adam & the guys.

It was my first time to Eden Wedding Barn, and even with the clouds rolling in, I must say, I was very impressed.

After I’d got a few images of Adam & the groomsmen, I had a wonder round the venue, to capture all the lovely little details 🙂

Followed by grabbing a few shots of some guests arriving.

As the bridesmaids had arrived, I knew it wouldn’t be too long before Ellie was arriving, so I got ready for her arrival.

As I was second shooting, I stood at the back of the room – to be honest, I sometimes prefer the shots I get at the back! ha

The clouds still looked pretty ominous, but we ventured outside, after the ceremony, for a confetti shot, and

whilst it was still staying dry, decided to do the bride & groom portraits before anything else 🙂

After we were happy with the portraits, I grabbed some candid shots of the guests, and we even managed a few group photos too.

Then it was time for, what turned out to be, some very funny speeches, followed by a few little games too.

We then grabbed Ellie & Adam, to take a few more portraits.

It was then time for the first dance 🙂