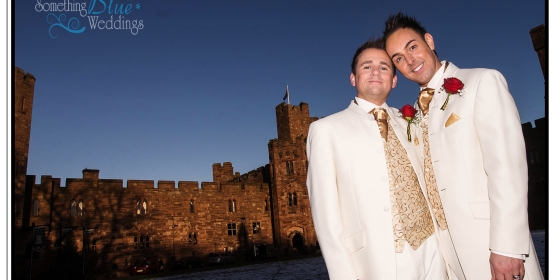 I was sat relaxing over the Christmas period, when I realised – Tomorrow’s the day I’m second shooting @ Peckforton Castle for Vivienne Edge!

It was an early start, with the sun just peaking through, but with a slight dusting of snow – Glorious day for a wedding 😉

I had met Dan & Matt, as I was lucky enough to be invited along to the pre wedding shoot, so knew this was going to be a good day!

After a great time doing the grooms prep, it was off for the gorgeous ceremony – Although the owl who was suppose to carry the rings didn’t play ball!

However, the doves were up for flying, so the dove release went without a hitch! 😉

We then had a little time before & after the groups, the the husbands & managed to grab some great shots around the grounds of Peckforton Castle.

The day for me finished just after the first dance, which, like the rest of the day was a lovely moment & an absolute pleasure to be a part of.